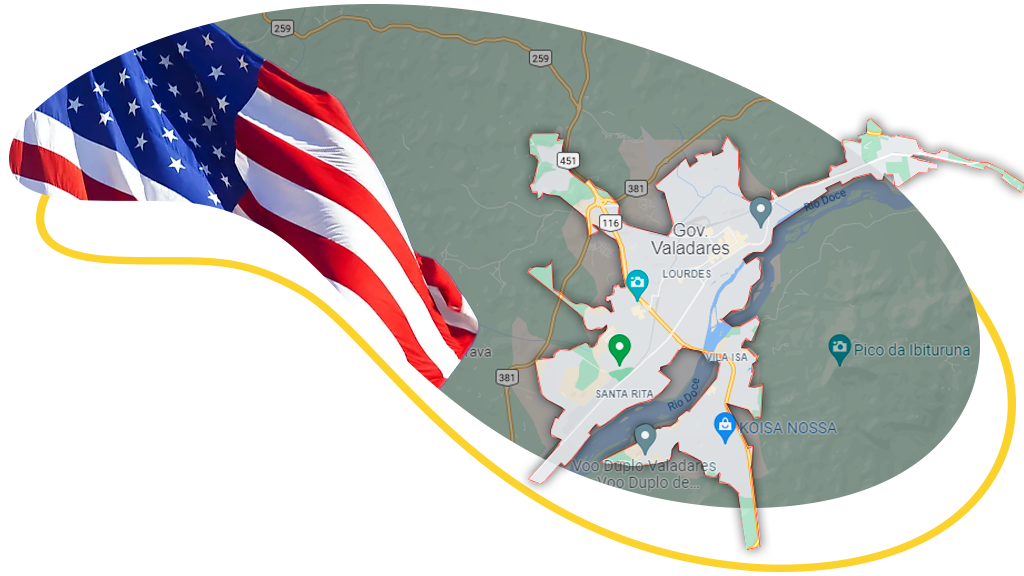 Governador Valadares: where did the migratory tradition come from?

The city of Governador Valadares is a migratory phenomenon. Since the 1940s, the “American Way of Life” has entered the city’s imagination and from then onwards, the Valadares-USA connection has only grown.

If you’re not born in Valadares, you probably know someone from there. But why are so many people leaving that same city in the region of Minas Gerais and coming to the United States?

When, how and who started this story?

It all started in 1940. Minas Gerais was in full industrial development, the creation of Vale do Rio Doce, the growth in mineral exploration and expansion of railways throughout the state.

Precisely during a railroad construction project, engineers from the United States temporarily planted themselves in the region. Much of the admiration for the American way of life and the dream of success in more northern lands begins with this interaction.

After the end of the project, Mister Simpson and his wife, Geraldina Simpson, stayed in Valadares and decided to open an English school, which began the first exchange program to the city. In the 1960s, the first Valadares arrived in the USA.

At a time when this was an opportunity restricted to the country’s capitals, upper-class Valadares began to spend a year or two studying abroad. When they returned, they enchanted the city with stories about the wonders of life in America.

Around the 1980s, with the economic crisis and high inflation, the number of Brazilians looking for a better life in the United States increased, but work visas became difficult to obtain and even tourist visas were denied. Thus would-be immigrants discovered the possibilities of falsified documents and crossings through Mexico.

The formation of social ties consolidated over the decades made migrating to the United States easier and more familiar than leaving other cities. The belief that everything would be better here maintained the interest of the Miners (those from this region), who, despite the difficulties, continued to find their way to Uncle Sam’s land.

The profile of emigrants, however, has changed a lot since the 1960s; the first to leave the country were from wealthy families and had a visa and exchange program. In the 1980s, those who tried to make a living in the US had largely completed elementary school (36%), entered the Mexican or Canadian borders (51%) and, in some cases, used false documents (10%).

It was during this period that Governador Valadares received the reputation of being an exporter of illegal immigrants, a “title” that has fallen to the ground in recent years, due to the increase in qualified Brazilians working legally in America.

Mainly due to the absence of professionals in several vital areas in the United States, those who are qualified and prepared manage to have space. The country suffers from a lack of doctors, dentists, engineers, IT professionals, physiotherapists, nurses and a large number of professions that require technical knowledge, a lot of study and certification.

Brazil and, in particular, Minas Gerais, is considered a hotbed of talent and an international reference for many of these professions. Of course, the difficulty in validating diplomas, checking references and documentation are extra obstacles, but they are not insurmountable.

Although the trend is changing, the path of many Miners to enter the country remains uneven. Of the 520 illegal Brazilian immigrants deported by immigration in 2020, at least a third came from Minas Gerais.

What is worrying is that many of the deportees are qualified enough to enter legally, with work visas or a green card. The lack of a waiting period and the lack of information often results in prospective emigrants following a more risky path to the American dream, one that is dangerous but expedited.

At BRZ we love the people of Valadar and all the Brazilians who come to try a better life within the “American Way of Life” and realize the “American Dream”, as we did. If you’ve just arrived or if you’ve arrived a while ago, you can rest assured knowing you have a support network here with BRZ. Come on down for a coffee and a chat! We’re here to help.